FIFA 23 TOTY release date, nominees, and how to vote

FIFA 23 TOTY – Team of the Year, for the uninitiated – is already on the horizon for this, most bizarre of seasons. The World Cup content is now a distant memory on Ultimate Team, and in its place will soon stand a handful of massively overpowered TOTY cards that will cost you a ton of coins to get in your squad if you’re not lucky enough to pack one.

FIFA 23 TOTY players are generally the best of the best, and the super rare, overpowered offerings will stay relevant until the very end of the PC game’s cycle, so while adding one to your squad may be difficult, it is worth the effort.

The Team of the Year will be unveiled on 19 January, but that’s a Thursday, and since promos usually release on Fridays, we’re taking an educated guess and saying the FIFA 23 TOTY release date will be January 20, one day later. It may also come out in the following week, on January 27. 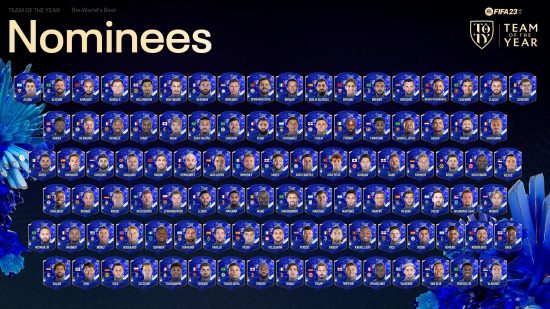 There are 100 FIFA 23 TOTY nominees who have the chance to be included in the Team of the Year, with the voting split into goalkeepers, defenders, midfielders, and forwards. The shortlist includes world-class talent from across the top leagues of Europe, with up-and-comers like Jude Bellingham and Buyako Saka rubbing shoulders with gargantuan names like Lionel Messi and Kevin De Bruyne. 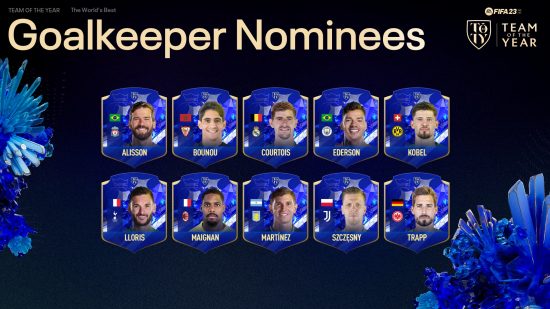 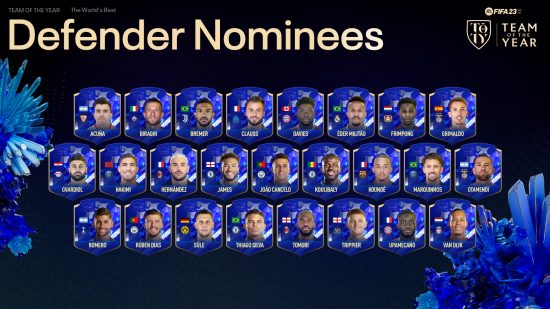 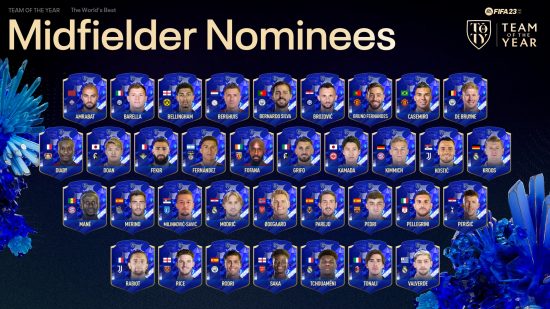 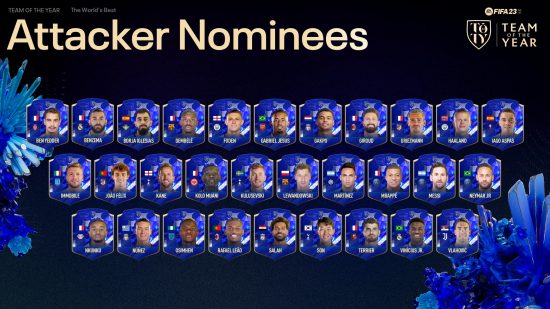 How to vote for the FIFA 23 TOTY

The FIFA 23 Team of the Year is decided by a fan vote, with each set of positions voted on separately. You can cast your vote for the TOTY by heading to the EA TOTY page, logging in with your FIFA account, and following the instructions. 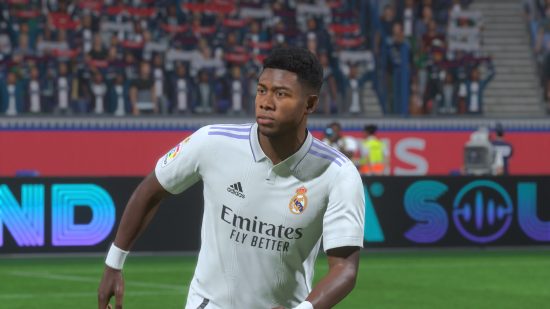 Each season EA releases a long list of players that will then be whittled down by a fan vote to create a condensed starting lineup of 11. These stars will have enjoyed a terrific year, and will typically receive a special type of in-form, known as a Team of the Year, or TOTY card. The final squad of special players usually combines ultra-popular players with those who complement the latest meta.

EA also holds a 12th man vote once the initial team is completed, giving players one last chance to vote for an extra inclusion from a small selection. You are likely to see content creators receive physical TOTY kits and swag, as EA pushes marketing for this promo much
further than others. 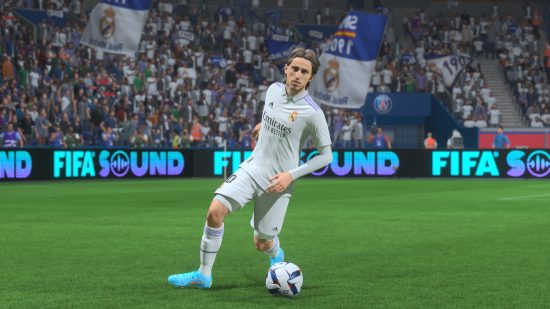 Here is our prediction for the FIFA 23 Team of the Year:

The entire team should have a distinctly Real Madrid flavour due to Los Blancos wrapping up yet another Champions League title in May. Thibaut Courtois silenced many doubters in the victory over Liverpool and is considered the best goalkeeper in the world by many. His height and dominance in the box make him elite on FIFA 23.

This is a tough pick, as Reece James likely would have been considered more fiercely if he didn’t spend the latter part of the year injured. Manchester City and Portugal’s Joao Cancelo is an incredible attacking wing-back whose high/medium work rates see him regularly contribute to offensive moves in the right system.

Man City fans will be used to seeing him pop up on the left wing, and there’s a good chance he pops up in the FIFA 23 TOTY selection as well.

The first half of Madrid’s Champions League-winning central defensive pairing. The Brazilian is pacey, reads the game well, and doesn’t stray too far from his position on the game due to his medium work rates.

Militao has been a fan-favourite on FIFA since his emergence at Porto in 2018, mainly due to his pace, strength, and above-average dribbling skillset for that position.

The imperious Croatian isn’t only a mainstay for the domestic club, RB Leipzig, but is now a key part of his national side. Showing pace, strength, and an eye for goal during the world cup, it’s very likely that we’ll see a TOTY inclusion for Gvardiol this year.

A key player in Milan’s first Serie A title win in 11 years, Theo Hernandez is the most explosive left-back on the planet right now. Even his standard card flaunts excellent attacking stats and is great for players who like to rifle a long-range howitzer on goal.

The Frenchman is absolutely rapid, too, most likely making a Hernandez card the most expensive of the defenders.

Madrid’s Federico Valverde is arguably the best midfielder in the world right now. The Uruguayan can seemingly play anywhere and has excelled both centrally and on the right wing this year.

He is hard-working, looks to play incisive passes, and only seems to score bangers. Those who love Squad Building Challenges may already have Valverde’s Player of the Month card, but we can reasonably expect something more when voting begins.

It’s scary how well-rounded Jude Bellingham is at just 19 years old. He has been a leader at Borussia Dortmund for a while now, but the World Cup saw him ascend to the same status for England after only breaking into the starting team as the tournament began.

Bellingham takes care of the ball, has an eye for a pass, and scores important goals. He can tackle, bust a gut to get back, and always puts his body on the line for his team. His gold card doesn’t do Bellingham justice in FIFA 23, so a TOTY version could replicate the kind of god-tier status we’ve seen from Yaya Toure, Ruud Gullit, and legends of that ilk over the years.

What is there to say about Luka Modric at this point? The 37-year-old is a future icon in the game. He was at the heart of Madrid’s Champions League win and Croatia’s deep run into the World Cup. With unbelievable vision, ball control, and defending, he’s a sure-fire inclusion in the TOTY.

Arguably the best player in the world right now after a brilliant World Cup. Kylian Mbappe’s speed, dribbling, and finishing prowess have long made him one of the most feared cards in FIFA. Well, guess what? He’s absolutely certain to get even more terrifying with an upgrade that will rank among the best, and most expensive players available. Get those millions ready.

The Norweigian’s height, pace, and lethality mesh together perfectly in FIFA 23. It’s time to run and hide if he receives a TOTY card; just get the ball to Haaland in the box and it’s goodnight.

Although Karim Benzema’s Ballon d’Or-winning year undoubtedly makes him a worthwhile pick, Haaland is likely to pip him in the vote due to the gold card’s popularity.

Are words needed with this one? Lionel Messi is finally a World Cup winner, meaning he is likely to receive a new card whenever the TOTY is released. Pace, dribbling, finishing; he’ll have it all; now with verified GOAT status. 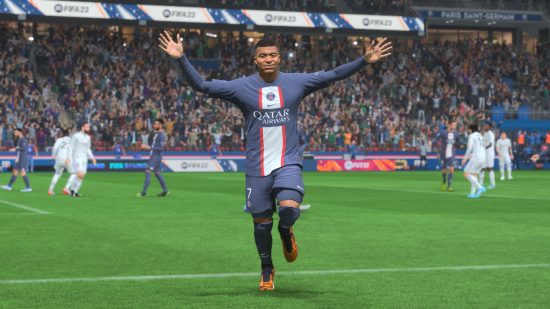 There you have all the current information and our own predictions on the FIFA 23 Team of the Year. With the influx of World Cup Icons and Heroes, the TOTY players have a lot to live up to if they’re planning on staying in the football game‘s already-overpowered meta.