You can only find Minecraft Gilded Blackstone in the depths of the Nether, having been added with the underworld’s huge update in Minecraft 1.16. The base block, Blackstone, is to cobblestone what Batman is to Superman – cooler, edgier, and way more fashionable. Add little specks of shining gold to that, and, well, you’ve got one of the game’s rarest and most beautiful blocks.

Like all blocks in Minecraft, it could be an excellent part of any Minecraft houses you build or make for a particularly imposing Minecraft castle. But like many rare materials in one of the best PC games, it’s not easy to come by. Try nicking a pretty gilded black from under the nose of a Piglin, and you’ll be running for your life. So, here’s absolutely everything you need to know about (safely) obtaining Minecraft Gilded Blackstone.

What is Minecraft Blackstone?

Blackstone is a special kind of stone that can only be found in the Nether. That means it’s a little bit harder to get than some other materials as you need to craft a Nether portal to go there, but the upside is that it makes for an alternative building block to cobblestone while still functioning in the same way.

So what is Gilded Blackstone?

Gilded Blackstone is also in the Nether, but in particular in Bastion Remnant structures and often close to Bastion chests. When mined, this will either drop a copy of itself or gold nuggets. If you have a pickaxe with Silk Touch, then you can always get Gilded Blackstone to drop in case you have a specific look in mind for your next creation. 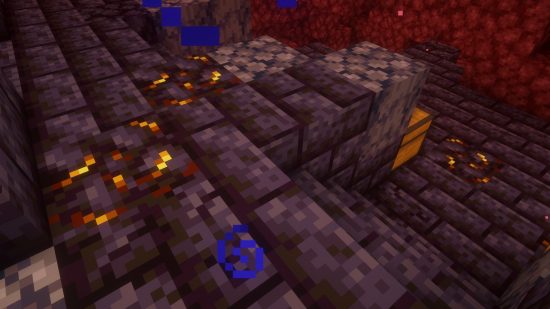 Where to find Minecraft Gilded Blackstone

Like Blackstone, Gilded Blackstone is also found in the Nether, but only in Bastion Remnant structures, which are a rare Nether structure – kind of what villages are to the overworld. When mined, Gilded Blackstone will either drop a copy of itself or gold nuggets, so if you want the pretty block itself, you’re best off using a Silk Touch-enchanted pickaxe, which you can get from an enchantment table.

Be careful, though, Bastion Remnants are crawling with Piglins, and they won’t take kindly to you stealing their precious golden blocks from the walls of their buildings. Funnily enough, if you’re planning on destruction, vandalism, and theft, you’ll need to be crafty, making sure no one catches you in the act. The easiest way to do this is simply to surround yourself with blocks.

If you decide against a life of crime, Piglins love gold so much that they will trade random items with you in exchange for gold ingots, one of which is Gilded Blackstone… but this method can take quite a while and become expensive if you’re after a lot of it.

What can you do with Minecraft Blackstone?

The good news is that Blackstone has a lot of uses. The bad news is that most of them are decorative, just the same as cobblestone. For example, you can, if you want to, build stone tools using Blackstone, but they’ll still have the appearance of normal stone tools. You can also use it to repair said tools, though again, with no change in the visuals of the item. It’s kind of a shame, as it means that a lot of the potential for showing off is taken away, at least in terms of practical items.

On the plus side, you can also turn Blackstone into slabs, stairs, and even walls. This means you can craft some bespoke Blackstone creations, even a whole Blackstone Minecraft village, if you can be bothered to build one. Sure, it’s only an aesthetic change, but let’s be honest, that’s kind of the same deal with a lot of items in Minecraft, and, lord help us, we keep on coming back.

And that’s everything you need to know about finding this gorgeous black safely. While exploring the Nether, you might want some Minecraft farms running back in the overworld so that you get plenty of materials when you get home. And if you think Piglins are a danger, take a look at the Warden, one of the other hostile Minecraft mobs just waiting to ruin your day.